Setting Limits to Others’ Anger 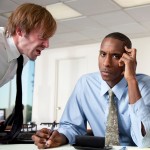 This blog post is the second in a series on anger. The previous post, “Damn, I just lost my temper again” delved into the difficulties of mastering our own anger. Below, I explore setting limits when others get angry with us or around us.

What do you do when someone gets angry with you?

Freeze, go into paralysis, and try to escape the danger as quickly as possible?

Or tense with adrenalin, your skin turning red, and raise your voice right back? Fight frustration with irritation?

Our usual responses do not work

In reviewing my own experience and the hundreds of leaders and employees, parents and children I have worked with over the years, our predominant reactions to anger tend to be flight or fight. Both of these self-protective responses are counterproductive.

If I shut down and play small, waiting for the storm to pass, I allow the other person’s anger to persist. There is no opposition or limit provided, and this can allow abusive relationships to form, whether physical, emotional and/or verbal.

If I “get emotional” in response, the conflict often escalates. It is rare that workplace anger goes beyond words, but it does lead us to say things we don’t mean. Relationships are strained, baggage forms, and months or years later, unhealed exchanges of anger linger.

Many of us do both, depending on the situation and the person. We are threatened, and the survival instincts of our brainstem take over.

“When you raise your voice,” my youngest son stared me in the eyes, his gaze teary, his hands over his ears, “it scares me.”

He spoke these words over a year ago, and they stopped me in my tracks, in part because they were so different from my eldest boy’s typical response to me. My first-born can quickly lose his temper, and I end up dialing us back from a power struggle (look out, teenage crisis…). Or he cries, and leaves the exchange.

But I actively talk about my temper, and how I’m working on it, so my younger son seems to have more distance from it. He sees it more as my issue than his fault. On the morning in question, he instinctively used his vulnerability to set a limit to my anger. His brainstem didn’t take over, driving him to run away or put up a fight. He somehow kept his head, and verbalized what was true for him. “I don’t like it when you do that.”

The power of his remark lay in how it confronted me with the unintended impact I was having on him. Without an aggression that I had to counteract, I was left with a mirror — and I didn’t like what I saw. He short-circuited the chain reaction that so easily happens when anger is introduced in a situation. This didn’t mean, however, that I let go of the “content” of what I wanted to say; I used his response to recenter myself in how I dealt with the issue we were having.

The mirror: accountability through vulnerability

None of this, of course, is a guarantee that we can change someone else. But in being clearer about how others’ anger impacts us, and setting limits to it, we put others in front of a choice. If they want to interact with us, they need to be committed to certain behaviors that are acceptable to us.

What is your experience in responding productively to others’ anger (or other aggressive behavior)? How do you hold up the mirror? I would love to hear your comments.