The Courage to Fail — Publicly 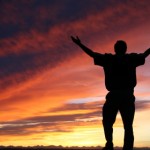 Gandhi is a larger than life figure — revered for his rousing movement of civil disobedience. He and his peaceful followers are credited with bringing down British control of India when no amount of violence could have.

But did you know that after his first peaceful resistance campaign failed miserably in South Africa, his outraged supporters beat him up so severely they broke his ribs? He later spent several multi-year periods in isolated ineffectiveness and public scorn. By 47, he had suffered more failure than most people could ever bear.

John Adams was so dispirited by his futile attempts to gain French financial support during the American Revolution that he at one point spent 6 weeks in a bedridden depression in Amsterdam. Regardless of how he is viewed by history, he felt like an abject failure, criticized by his peers back in the Colonies.

A central theme to our work involves exploring — and then overcoming — how our Egosystem’s™ obsession with our self-worth traps us in a Performance Anxiety Paradigm. Our sense of value and worth become contingent upon our performance. When we win or succeed, we often feel a sense of high, superiority, being important and needed. When we lose or fail (or simply come up short on our expectations of what we should achieve), we can feel depressed, inferior and beat ourselves up.

The direct consequence of this is that we get progressively narrower in our focus. We do more of what we believe we can do well, and less of what we struggle at. When we’re on the cusp of failing, we can succumb to any number of counterproductive hedging behaviors (procrastination, disorganization, blaming others, being disinterested — the list goes on and on) to appease the terror of our ego.

We commit only when we’re sure we can deliver the required result.

But as we explore in Personal Mastery, guaranteeing a sure thing is not commitment. Commitment involves investing our whole selves, with no exit doors, to an endeavor we care about, especially at a high risk of failure. We need the commitment precisely because the outcome is unknown.

And this is what we see with Gandhi, or other giants of history. In certain examples they had exemplary talent, but in most cases they simply had a commitment to a sense of purpose that surpassed their ego’s aversion to failure. So while other people gave up, or chose the path of higher probability, they accepted long periods of criticism and inadequacy — and pursued what inspired them.

This Performance Anxiety Paradigm is so omnipresent, however, that we take it as given. Our fear of failure draws its power from this myopic view of what matters. In a paradigm in which our purpose is more important than the result, the danger of failure becomes weaker. We can free ourselves from the performance dictator.

Most importantly, we are passing on to our children this obsession with succeeding. I want my two children to learn how to create responsible lives filled with passionate pursuits and close relationships. And when they struggle at something I get afraid they’ll feel bad or not be able to “succeed”. But if I can teach them to commit to what they want and not let their failures trigger a downward spiral of self-judgment, I’ll have offered them something useful as a parent. At 42, I’m still trying to learn it for myself.

I would love hear your thoughts on how you learn from, struggle with — or avoid altogether? — failure.