The Power of Seeing Ourselves from the Outside 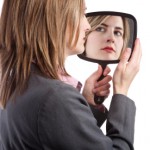 Do you really know how you come across to others? If you’re anything like me, you have some image in your mind of how people see you. Sometimes, the image is slightly better than the reality. Earlier today, I glanced at a mirror while making a purchase at an electronics store, and I noticed that I put my hands on the counter in an awkward way. My first thought was, “do I really do that?” I just didn’t look like the cool, confident guy that I know I am.

In other domains, the self-image could be much more dire than reality. In a recent meeting with my boss, I felt the need to apologize for coming across as critical. She quickly responded, “I didn’t perceive you that way at all!” I suddenly wished I hadn’t put that thought into her head!

We are constantly evaluating how we come across to others, and we are often wrong. Wouldn’t it be powerful to see ourselves as others see us, even just for a few moments? What would we discover about ourselves?

Just as the camera captures it

The bulk of my year is spent co-leading our 360º feedback department at Learning as Leadership, but during our seminars, I’m behind the camera recording almost everything that transpires between the participants and facilitators. This enables participants to revisit group sharings or exchanges that were especially powerful or difficult, and allows them to observe themselves as others may have in those moments. Over the years, this has resulted in some profound moments of self-awareness among participants.

For example, one participant was advised to look at a recording after an exchange with a facilitator became heated. Upon viewing, that participant laughed out loud — though he adamantly had denied he was angry during the exchange, the evidence was undeniable. That was a great lesson for him, and he saw how this could cause issues in many areas of his life. I think it’s worth mentioning that this person was over 70 years old — that’s seven decades of not being aware of how he felt and how that impacted those around him. It was meaningful for me to see someone many years my senior having this realization late — but not too late — in life.

On the other end of the spectrum was a middle-aged woman who was having trouble connecting to her passion. She saw herself as emotionally flat, and couldn’t see a way forward. During a morning sharing, she stood up and shared something very emotional about her relationship with her daughter. She was clearly moved, and later decided to revisit the moment on video. Simply seeing herself standing in front of the room, animated by and present with her feelings, put a dent in her belief that she was emotionless. Suddenly, she was more than she previously (and habitually) thought she was.

We are, for better and worse, more than who we think we are. The camera might accentuate our defensive side, or it may betray a secret reserve of vitality that we didn’t know we had. And if the camera can see those hidden dimensions of our personalities, then so can the people who interact with us day in and day out.

Maybe the guy at the electronic store was so impressed by my eye contact that he didn’t notice my hands on the counter. Maybe my boss does think I’m critical sometimes, just not during our most recent meeting. We are each so multifaceted — so fundamentally nuanced — that it makes as little sense to deny our rough edges as it does to tie ourselves down to our story of not being good enough. Your beliefs about yourself — good or bad — can be self-limiting. This is why we at LaL sometimes call the ego — our constant preoccupation with our own self worth — an anti-learning or anti-growth mechanism. Be open to others’ perceptions of you. You’ll gain invaluable insights into yourself and, if you choose to have a different impact, can then change your behavior. If you want to grow, take a lesson from the cameraman: Be willing to be surprised by who you really are.

What have you learned from looking at yourself through an outside lens?