What’s Really Underneath Your Unwanted Behavior? 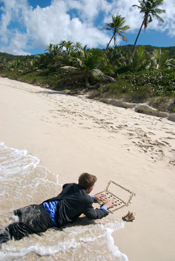 One of my clients is your typical type A, fast-paced, multi-tasking Vice President. He can’t sit still, and his electronic devices are constantly invading his work and home life — and he knows it. He prides himself on being organized and efficient, is a Harvard graduate and a rising star in his company. He is also young compared to his peers with similar titles. By all indications, he has a promising career ahead of him.

One Friday afternoon (West Coast time) I sent him an email about a non-urgent matter. Even though it’s the evening on the East Coast where he lives, I get an immediate response back saying…

“I am hosting a barbeque at my home with my family and friends in my backyard, and how bad is it that I am replying to you right now?”

I could just imagine him, blackberry in one hand, barbeque tongs in the other.

My client’s issue was not his success at work but the fact that personal things he genuinely cared about were not being attended to, but instead, set aside. He knew he shouldn’t be emailing me from the family barbeque, yet he found he just couldn’t help himself.

The point is that knowing that something isn’t working is not enough. Another way to say this is that we can’t will ourselves through behavioral changes. What really gets us to change is unwiring the original driver of the behavior.

A key step in this process is becoming aware of the ego-benefits of those behaviors. For example, if I respond to non-urgent emails late at night or during weekends, the benefits may include:

The “high” or adrenalin rush we get out of these perceived ego-benefits is the addictive hook that provides us with the illusion of being protected from our insecurities (Do they think I’m competent enough? Am I accepted?). Like any other addiction, these things feel so good that they numb us to the negative consequences of our actions.

For this reason, it’s critical that we get in touch emotionally with the costs of our problematic behavior, and stop distancing ourselves from them and justifying our actions.

Otherwise over time, those costs accumulate in a way that causes more distance in our relationships and makes us less trusted by our co-workers, staff and families.

In my client’s case, when he finally looked at the accumulated costs of his behavior, it hit him in the stomach in such a way that he couldn’t avoid it.

One of the costs he got in touch with — in addition to the cost to his family — was that his behavior was acting as a model for his team, and they were feeling pressure to answer calls and emails during vacation and at night, regardless of their urgency. This was enabling a culture of poor work-life balance, which was leading to burnout, poor employee engagement and eventually, turnover.

So one way to begin unwiring the behavior is to connect to the long-term ripple-effect costs, such as, “Where am I going to end up in my relationship with my wife and kids if this continues?” and, “How is this going to impact my team’s performance down the road?” Because in reality, if you don’t do something, it is not only going to continue, it’s going to get worse. Identifying the costs of your behaviors and the ego-benefits you get out of them can stop that ripple effect in its tracks.

Take some time to think about and write down what some of the costs (short and long term) are of the unwanted behaviors you have been wanting or trying to change. What ego-benefit do you gain from those behaviors? We’d love to hear your comments.